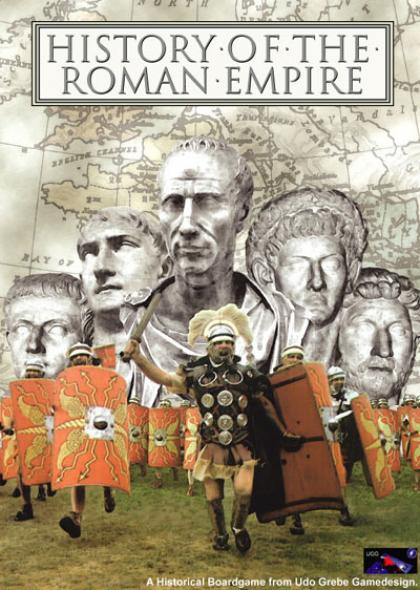 History of the Roman Empire

"The History of the Roman Empire" covers the time-period from the Rise to the Fall of the Roman Empire in seven game turns starting in 60 BC (the first Triumvirate composed of Caesar, Crassus and Pompeus) until the last [Western] Emperor (Romulus Augustus) in 476 AD.
The map contains the entire Mediterranean area as well as a part of Asia Minor.
Each of the up to four Players takes the role of one Roman Faction and one group of "Barbarian"-Peoples (non-Romans) and by playing certain event cards you can gain control over minor Kingdoms.
The game is best suited for 4 Players but can be played by 3 or 2 Players as well.

The Game "History of the Roman Empire" is not strictly historic but offers "a great lot of Flavor about this" with it's 42 Roman Emperors (and Pretenders) and the 34 different "Barbarian" Peoples and minor Kingdoms. Since every Player controls Romans as well as Barbarians you will get all kinds of situations like Romans vs. Barbarians Romans fighting among themselves or Barbarians fighting other Barbarians.
The Emperor for each Roman Faction changes every Game Turn as well as the Barbarian Peoples that the Players control…
With it's easy to learn rules (Players who are familiar with "Espania", "Britannia" or "History of the World" will find some similarities and some new features) and the constantly changing Barbarians "The History of the Roman Empire" can be great fun.

The Players will have to decide how to use their Roman Legions as well as how to use the Armies of their Barbarians and of course where to plan new Cities and Forts (for the Roman Factions).
Since it is worth much more Victory Points to control all areas of one color soon everyone will try to establish his own small empire (and of course to disturb the others), until the more powerful Barbarians like the Goths or the Huns arrive and threaten to take control of the map.

Each turn the Roman Factions spend some of their Victory Points on new Legions and/or Forts or Fortresses, the Barbarians do not use their Victory Points for recruiting Units but rather "mobilize" up to a certain number of Armies (how many units depends on the Barbarian People).
Every game will present you with new Situations since the Players will work on and change their strategies and the 45 random cards will influence every game in a unique way…
At the end of the seventh turn, the players total their victory points and determine the winner.