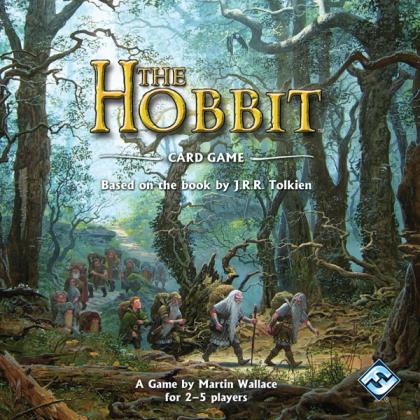 In The Hobbit Card Game, two teams play against each other: good versus bad. The basic game mechanism is trick-taking, but whoever wins the trick can distribute the cards amongst all the players, depending on his character's ability. Bilbo, for example, must keep one card from the trick, give one card to another player, then discard the remaining cards.

In addition to a special ability, each character has a special affinity with the forces that govern his motives. Gandalf, Bilbo, and Thorin are scions of good, while Smaug and Bolg are cruel and evil. The cards respond to these alignments accordingly: a white star on the card symbolizes the forces of good; the helm of an orc adorns cards possessed of evil power; and a card with a pipe grants players the ability to draw an extra card in the next round. If a card with the opposite power is assigned to your character (Gandalf gets an orc helmet, or Smaug gets a star), then that character takes a point of damage. If your character is already damaged and is assigned a card with the symbol of their own side (Bilbo gets a star, or Bolg gets an orc helmet), then that character gets a single point of damage healed. Two points of damage eliminates a character from the game, so use the cards you win to knock out your opponents and heal your allies.

The round ends when players have emptied their hands, and the last of the cards that were in play have been assigned to the characters. Players who have taken enough damage are eliminated at this point. Depending of the number of players, if enough good characters have survived, the game continues until the final round. If the evil characters have killed enough of the heroes, then the villains win the day!