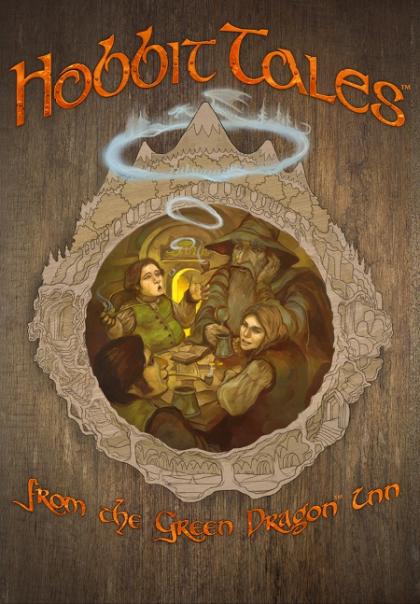 ‘Queer things you do hear these days, to be sure,’ said Sam. ‘Ah,’ said Ted, ‘you do, if you listen. But I can hear fireside-tales and children’s stories at home, if I want to.’ ‘No doubt you can,’ retorted Sam, ‘and I daresay there’s more truth in some of them than you reckon. Who invented the stories anyway?’
The Lord of the Rings, J.R.R. Tolkien

Players are Hobbits telling tales in front of a mug of beer at their favourite inn in the Shire. Silent woods and remote mountains, Elves, Goblins and Giants populate their stories...

During the game, players take turns as the Narrator and improvise a story using a hand of illustrated cards. The other players try to twist the tale, playing hazards and fearsome monsters. Drinks are served, smoke-rings are blown, and the best narrator is cheered by everyone present.

Hobbit Tales is a game for 2 to 5 Hobbits, authored by the award-winning designers Marco Maggi and Francesco Nepitello, creators of the Tolkien-themed War of the Ring strategy game and The One Ring role-playing game.

This game contains a set of rules, 1 board, 75 Adventure cards, 40 Hazard cards, 5 coasters, a set of cardboard tokens and a twelve-sided The One Ring Feat die.

Includes rules to use Hobbit Tales in conjunction with the The One Ring, Cubicle 7’s role-playing game set in Tolkien’s Middle-earth.