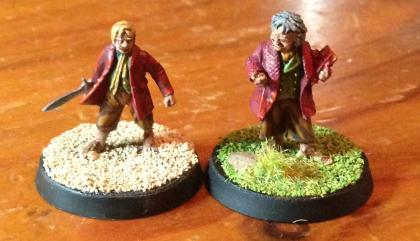 A new game by Games Workshop following the release of the movie The Hobbit: An Unexpected Journey by Peter Jackson.

The Hobbit: An Unexpected Journey Strategy Battle Game is a tabletop fantasy wargame for two players. You can recreate the adventures of Bilbo Baggins, Gandalf, Thorin Oakenshield and his friends and play small-scale skirmish games involving miniatures models. Rules that govern how the models move and fight are contained in the 288-page full-colour manual. The game manual also contains even scenarios recreating the events of The Hobbit: An Unexpected Journey movie and hobby sections. Players choose and collect armies of models that are described in separate Warhammer army books. A range of models is also available from Games Workshop designed by Alan Perry, Michael Perry and Aly Morrison, in Finecast and in plastic.

The game is a revision of The Lord of the Rings: Strategy Battle Game.