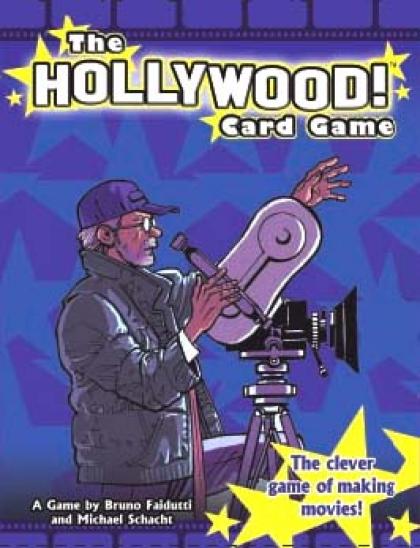 The Hollywood Card Game is a fast and simple card game from Bruno Faidutti and Michael Schacht, designers of such games as Citadels, Coloretto and Fist of Dragonstones. This exciting and unique card game invites players to compete to get the best directors and most famous actors for their films. With an easily accessible theme, and simple but deep gameplay, The Hollywood Card Game appeals as much to casual gamers as it does to hardcore strategists.

The game plays over 3-4 rounds (the same number as the number of players), with each player having one turn to play first. Each round a new Hollywood Area is created by shuffling 3 Star cards and 11 Movie cards together and dealing them out into 4 columns. Players take turns either placing a marker on the bottom card of a column (pushing the preceding markers up the column), or playing one of their Studio cards (Skip a turn, or take two turns in a row). Each studio card can only be used once per game. Once each card in a column has a marker on it, that column is closed, and no more markers have been played in this column.

Once all players have run out of markers, the round is over, and cards are allocated to players based on the marker on the card, and starting from the TOP left corner. Cards are allocated one at a time, and must be used on a Project immediately. Film cards must be allocated to a Project of the same genre (Horror, Action, or Romantic Comedy), or allocated to a new project if the player does not already have a Project of that genre. Star cards must be allocated to any project, however this will immediately complete a Movie, which no more cards can be added to. If a Star card cannot be allocated to a project, they cannot be held to add to a later project. Movies score points for the number of Film cards in them (with Award Film cards counting twice), multiplied by the number of stars on the Star card. Blockbuster cards stand alone and are worth 2 points each. Additionally, each player scores one point for each Film card in their largest unfinished project (no ties allowed). The player with the most points wins. If players are tied, the player with the single most valuable movie is the winner.

The Hollywood Card Game contains 64 cards, 16 film reel chips, and a rule sheet. The game is suitable for three to four players Ages 8 and up