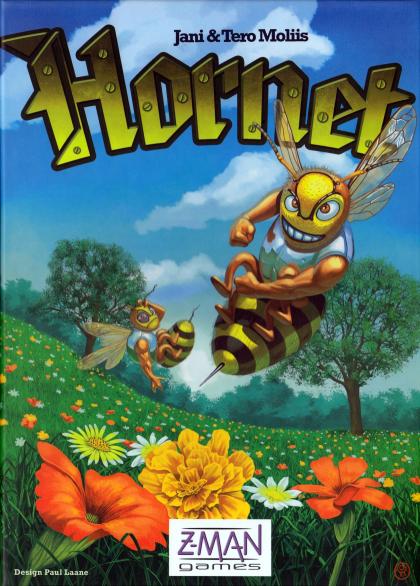 Hornet is an area control game with simultaneous action selection and a dual-layered resource system. The game board is a modular board built of hex tiles representing a landscape with fields of flowers and hornet nests of various sizes. The players have an identical deck of action cards and each card can be used multiple times. Each game turn, players secretly pick an action card that is revealed simultaneously with the other players. The actions are resolved in the numerical order of the action cards, with each player allocating the action to either one of their hornets on the game board. The hornets compete to collect nectar from the flower fields that is in turn used to produce honey in the nests. The winner of each hornet nest is resolved in a pre-determined order, with the winner being the player with the most honey in the nest. The game is won immediately by conquering three nests or by having won two nests by the end of the game with the highest aggregate amount of honey produced. The nature of the various action cards ensures high player interaction, causes a need for pre planning a number of turns ahead and allows the execution of cunning tactical moves. The easily comprehensible rules, variable game set-up and eye catching artwork with a cheerful theme facilitate an enduring and pleasant gaming experience.

Box back text:
Hornet is a stinging tactical boardgame for the entire family in which players need to anticipate the moves of their opponents and at times also bluff a bit. Each player controls a pair of hornets swiftly flying about in flower fields collecting nectar and producing as much honey as they possibly can. The buzziest honey maker will win the game!