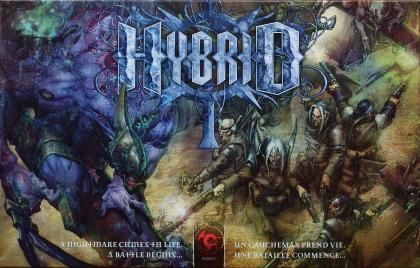 The Steel Age
Whereas it is with the head of the young empire of the Scorpion, Dirz is suddenly had by a vision of apocalypse. It launches out then to body lost in a secret project to the worrying name: the Hybrid Code. Alas, Shamir, the Alchemical capital is attacked by mysterious warriors; Dirz disappears before to have been able to enjoy the fruits of its dark intentions. The laboratories of the Hybrid Code, private of resources, die out in their turn and sink in the lapse of memory.

The Age of Darkness.
The incommensurable energy released by the ritual of the Paddle, in the heart of Second Shamir, flows through the continent of Aarklash and reactivates the disastrous sanctuaries of the Hybrid Code...

Nowadays, in Akkylannie.
The population of the village of Glasinhar must face a terrible threat to which it is not prepared: monsters emerge from the entrails of the ground and are devoted to a massacre.
Only a handle of warriors interposes between the impious creatures and the remainder of the continent: valorous Templiers of the Cabin of Hod.
Hybrid Game Box

Before disappearing, Dirz the Heresiarch, founder of the Empire of the Scorpion, nourished a shadowy project: Code Hybrid. Many decades later, Dirz's forgotten laboratories mysteriously reactivated themselves... Today, monsters spring from the innards of the earth! Only has handful of warriors stand
between these impious creatures and the rest of the world: the Griffins of the Lodge of Hod.
Come and join has blood-filled battle in the gloomy underground laboratories!

Take part in a bloody battle in the corridors of lugubrious laboratories!
Presented in preview at the time of the last show of the Monde de Jeu, HYBRID is the new game of the Rackham range.
Although the action proceeds in the universe of Aarklash, the principles of play are very different from those of Confrontation and Rag' Narok : the game of Hybrid proceeds on richly detailed, square modular game tiles.

You can achieve the ten perilous missions suggested in the basic booklet or to invent your own laboratories!
The mechanisms are also innovative: Hybrid is played with dice with d10’s. The capacities of each combatant are described in four characteristics to which many special Aptitudes are added, as the ability to emit an aura of battle or to become stronger after each death inflicted upon the enemy. The tables of Capacities, as for them, describe the prowesses that your warrior can carry out at the critical times in the battle!

The basic box contains two factions: the Griffons of Akkylannie, represented by Templars of Hod , and the impious creatures of the Alchemists of Dirz . These figurines is delivered with the reference cards which also make it possible to play them Confrontation and Rag' Narok. All are compatible: the majority of the references for Confrontation and Rag' Narok will be able, in the long term, to be used within the framework of the Hybrid game.
Templars of Hod include Worthy Ambrosius , wise equipped with mysterious capacities, like three Répurgateurs and their Seneshal , of frightening warriors trained with the special operations.
Against the combatants of the Light, the children of the Hérésiarque are short handed: not less than four Plagues of Flesh the corridors in the search of victims. Three Hybrids represent the prototype of the warrior of excellence imagined formerly by Dirz itself. The Alchemical perfection carries a name and a horrible face: Aberration . Nothing seems to be able to stop this living nightmare which has the power of a machine of war and the speed of an unforeseeable storm...

Note finally that the amateurs of conversion were not forgotten: the arms of Répurgateurs and Hybrid are interchangeable and make it possible to create several models starting from the same base.
Will you be able to take up the challenge of Hérésiarque?