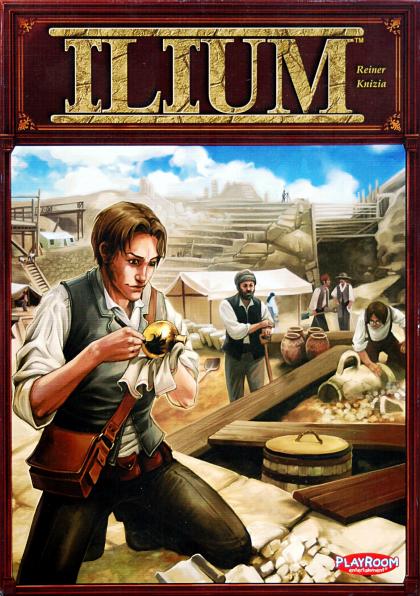 "Ilium is another term for ancient Troy, and players are archaeologists following in the footsteps of Heinrich Schliemann, looking for artifacts in the newly excavated site of that fabled city.

The board and game play might remind you of Portobello Market, the first strategy game of this style from Playroom. The board shows a number of dig sites, with paths of different lengths connecting the sites. To start the game, you place a number of discovery tiles on each site equal to the number of paths leading to it. The tiles show one of five types of artifacts, with 1-5 artifacts on a tile. Each player has his own deck of cards, and the card you draw each turn determines how many archaeologists (1-3) you place on one empty space on any path. When a path fills, the player with the most archaeologists on the path collects one tile from one of the adjacent dig sites – but in each site he may choose only the tile with the fewest artifacts; the player with the second most artifacts takes the tile that the first player didn’t. As the dig sites empty, the more valuable tiles can be claimed.

The game ends after all five tiles with five artifacts on them have been claimed. Each player was dealt a secret card at the start of the game representing one of the types of artifacts, and players must now discard the tile of that type that contains the most artifacts. The player who ends up with the most complete sets wins the game."