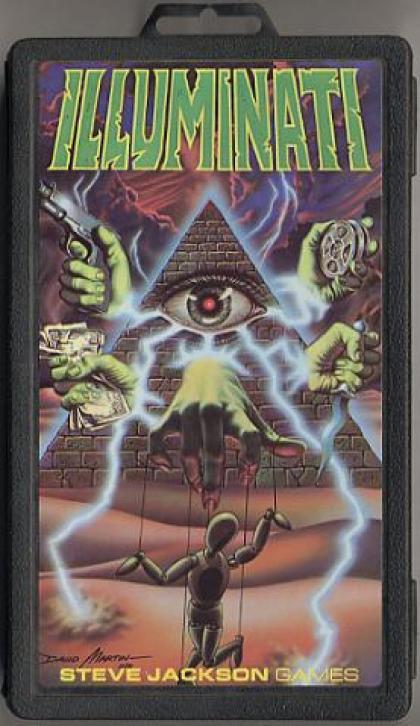 Illuminati is a classic Steve Jackson (I) game of world domination. Each player takes on the role of a secret society attempting to spread its tendrils into special interest groups throughout the world.

The game consists of three different cards (illuminati cards, group cards, and special event cards) and money. During a player's turn, a new card is drawn from a deck containing both group cards and special event cards. If it is a special event, the player in turn keeps the card and plays it when desired. If it is a group card, it is turned up along with any other face-up cards. The player in turn may then attempt to take over any group. This can be either a group on the table or a group already controlled by another player. If another player already controls the group it is more difficult to take it over, but not impossible.

How difficult it is to take over a group depends on the strength of the controlling group, the resistance of the group being taken over, the proximity of the group being taken over to the controlling player's illuminati card (if someone already controls it), and other factors. Once this is determined, both the attacking and defending player can modify the odds further by spending "megabucks". Once a group is taken over, it has to be attached to the card structure the player already controls. How cards can be attached to each other is limited by in- and outbound arrows on the cards, and maintaining a well-structured tree of groups can be vital to success.

The winning condition for each player is different and depends on what illuminati card that player has.