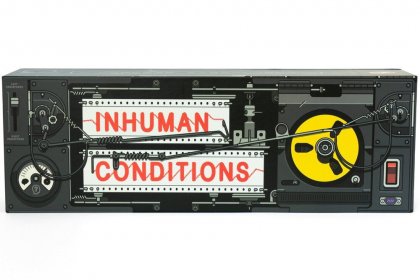 From the co-creators of Secret Hitler &amp; Better Myths: a Blade Runner-inspired, five-minute party game for two players.&#10;&#10;Inhuman Conditions is a five-minute, two-player game of surreal interrogation and conversational judo, set in the heart of a chilling bureaucracy.&#10;&#10;Each game has one Investigator and one Suspect. Armed only with two stamps and a topic of conversation, the Investigator must figure out whether the Suspect is a Human or a Robot.&#10;&#10;Robots must answer the Investigator's questions without arousing suspicion, but are hampered by some specific malfunction in their ability to converse. They must be clever, guiding the conversation in subtle ways without getting caught.&#10;&#10;Humans may speak freely, but may find this freedom as much curse as gift. There are no right or wrong answers, only suspicious and innocuous ones, and one slip of the tongue could land Humans and Robots alike in the Bureau's Invasive Confirmation Unit. There, alongside Investigators who make improper determinations, they will await further testing ...&#10;&#10;&mdash;description from the publisher&#10;&#10;