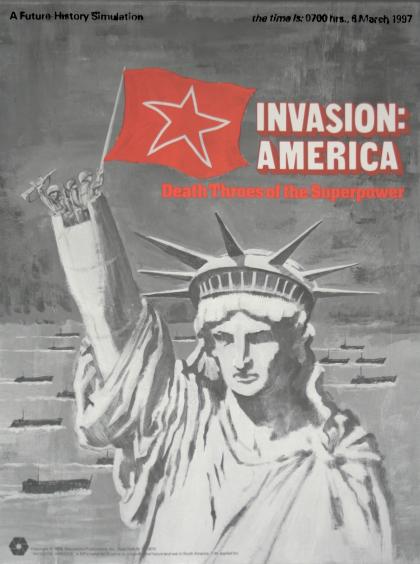 Invasion: America is a wargame designed by Jim Dunnigan and published by SPI in 1976. It depicted a hypothetical corps-level invasion of North America by a coalition of three invaders: The European Socialist coalition, the South American Union, and the Pan Asiatic League. The game is played on a 35 inch by 42 inch map, with 400 cardboard pieces representing the armed forces in the war. As was typical of wargames of this genre, each piece had numerical combat and movement ratings printed on it. The board is divided up into small hexagons (each of which represented approximately 50,000 square kilometers). On each turn a player can move all of his pieces through a number of hexagon spaces equal to its movement rating. Then pieces in adjacent spaces engage in combat by comparing their combat ratings and rolling dice. The combat ratings and the dice roll are cross-referenced to determine the outcome of the combat. Many spaces on the map also have distinctive terrain features like forests or mountains which affect the ratings of units in those spaces.

Invasion: America is intended as a four player game; one player is the defender and controlls the forces of the United States and Canada (Mexico and Central America were American-occupied territory). The other three players are the three invaders of the coalition. Each turn of the game represents one month and the game lasts for 60 turns. The North American player wins if he still controls a portion of the continent by the game's end. If the North American player loses, whichever of the invading players holds the most territory is the winner. The result is that the invaders cooperated to an extent in attacking the North American player but ultimately were competing against each other. Invasion: America was a popular game for SPI and led to a 1978 sequel, Objective Moscow, in which it was the Soviet Union that was being invaded.

Issued in both box format and flat tray