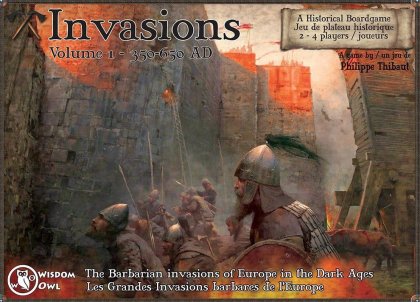 Invasions simulates 600 years of European history, from 350 to 950 AD more or less.&#10;&#10;It will come as two games: (volumes 1 and 2), one covering the early period (till 600 AD more or less, before the Arabs) and another on the late period (from the Arabs till the Normans). During this period, known as the Dark Ages, many peoples invaded the continent, each hoping to colonize it or conquer a realm there, replacing other peoples established before them. But the new conquerors would never maintain their new powers for long, as they were also themselves invaded by other and newer peoples. This game ends by the time those great migrations ended.&#10;&#10;In Invasions, each player controls many different peoples. Each of them strives to carve a realm at the best possible location, in view of historical objectives assigned by the rules. Some will prevail and found strong kingdoms and prosperous empires...others will vanish in the void of history.&#10;&#10;