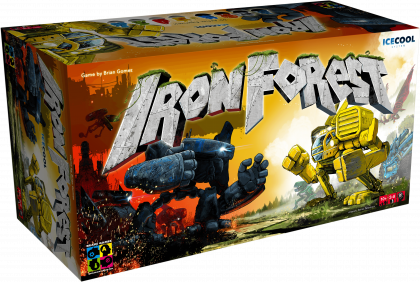 Story&#10;The game Iron Forest takes place in a fantastical land called Neemus. Several different clans call Neemus home, including Wolf Clan, Hedgehog Clan, Rabbit Clan, and the Owl Clan. While the many clans have called this land home for as long as they can remember, they know they were not the first to live here. On the edge of Neemus lies a place the clans call Iron Forest, filled with strange looking structures and creations. Upon deeper exploration, the combined forces of Animal Clans discovered incredible technology that they quickly learned how to use, creating their own amazing machines that helped them develop their own civilization. However, one day, Iron Forest sprang to life and rose into the sky, building machines of their own. This Iron Force has one objective: to take back the technology stolen from Iron Forest. Now Animal Clans must fight back to protect their homeland.&#10;&#10;Gameplay&#10;Iron Forest is a flicking game for 2-4 players, split into two opposing teams: Animal Clans or Iron Force. Each scenario offers asymmetrical objectives that each side needs to fulfil in order to win. Scenarios involve players trying to control certain areas of the game board, destroy opposing team mechas, collect certain objects, and much more. On their turns, players draw cards from their team's activation deck, then activate the mecha depicted on that card by either flicking it or launching it. Players also have access to a range of different power-up cards that will grant their side unique abilities, turning the tide in their favour!&#10;&#10;&#10;&mdash;description from the publisher&#10;&#10;