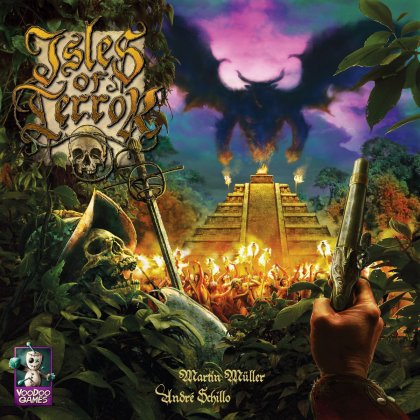 Embark on sinister adventures in this 1-4 player story-driven strategy game of exploration and conquest.&#10;&#10;Isles of Terror can be experienced as a competitive or a cooperative game by 1-4 players. Each game is based on an adventure with an overarching storyline that can either be played separately or as part of a campaign.&#10;&#10;You will need to explore different isles and overcome their dangers in the form of minions, terrors, seasonal events, and unforeseen situations. Carefully manage your resources as you advance deeper into the jungles through fighting or negotiating with its inhabitants in order to gain control of the areas, to raise camps, and to strengthen your position.&#10;&#10;In the end, earning victory points is essential to win the game and they can be earned in many different ways, e.g. by following the given scenario objectives, focusing on progress tasks and completing missions. Now it is up to you to evolve a strategy and bravely lead your expedition into the unknown regions of the Isles of Terror.&#10;&#10;WHAT MAKES IT SPECIAL&#10;&#10;Each game is unique &ndash; Seasonal effects, an exploration deck, and randomly set up area tiles shape a new experience with different and unpredictable explorations in each game.&#10;&#10;Against each other, together or on your own &ndash; Whether you prefer competitive, cooperative or solo games, Isles of Terror features all of that without losing anything of its mechanics or atmosphere!&#10;&#10;Become a part of the story &ndash; Delve into a new story with each adventure or follow the overarching plot while playing a campaign. Backgrounds, epilogues and the adventure design itself will help you to feel like you are part of the story.&#10;&#10;Stay in the game &ndash; There is no player elimination and a growing threat system will help to keep the leading players within striking range so that no player ever feels like they do not stand a chance of winning anymore.&#10;&#10;Choose your strategy &ndash;Go after the adventure objectives, complete missions, focus on your progress tasks, or even raid other players to earn victory points. There are plenty of options to win a game.&#10;&#10;Self-restricting action system &ndash; Plan ahead and choose your actions wisely as each decision restricts the usage of your other actions during a round.&#10;&#10;Endless possibilities &ndash; Easily create your own adventures and campaigns by customizing the isles&rsquo; layout, minions, bosses, progress tasks or adventure objectives.&#10;&#10;&mdash;description from the publisher&#10;&#10;