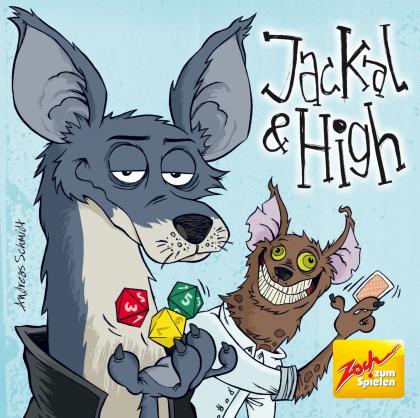 In Jackal & High, each player has three eight-sided dice, and with these he attempts to match the values of "pack cards laid out in the middle of the table. Each round the players roll their dice and distribute them on the different cards. They can hold back dice for the next round, rolling them again then. The sum on a player's dice placed on a card must always be lower or the same as the card's value.

After three rounds, all dice must be placed. Dice which cannot be placed go to "Vulture Valley", where at the end of each round you can win an additional card – or lose one of the cards you already collected. The pack cards are then resolved as follows: Each pack card is given to the player whose dice match the card's value or who has the highest total on this card. If players are tied on a pack card, they compete in "dice combat" using only the dice on this card, with the highest total winning the card. Thus, dice combat might take place between one die and three dice, both matching the card's value.

Special cards allow a player to collect more than one card at once, e.g., all cards which could not be won by matching dice in the previous round.

Aside from a numerical value, each pack card shows a number of paws, and these are the real victory points. The player who holds the most paws at the end of the game is declared leader of the savanna.