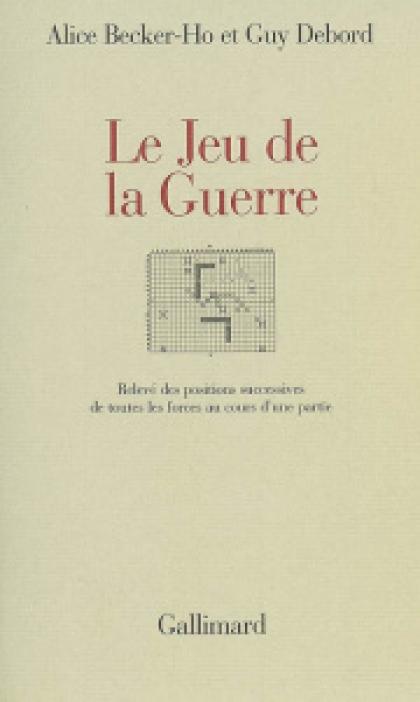 A game that attracted little attention when it was published in the eighties, despite the reputation of its designer. The concept was developed by French essayist Guy Debord (1931-1994) in 1965, but not published for many years. Debord described himself as a filmmaker, but he is known as the founder and one of the most important members of the Situationist International, a small band of avant-garde artists and revolutionaries. One key concept of their theory is the spectacle: the image replaces substance and modern capitalist society is a society of "spectacular" commodity consumption. Having long been treated as a producer, the worker is now courted and seduced as a consumer.

In 1977, Debord created a small publishing company named "Les Jeux Stratégiques et Historiques" with French movie producer Gérard Lebovici. The first game was Debord's "Le Jeu de la Guerre", but only 4 prototypes are produced. The game was published as a book, with a map, rules and detailed descriptions in 1987. (Lebovici had been mysteriously shot in a parking lot in Paris by this time). In 1991, Guy Debord decides to insist that all his movies & books be destroyed. It is also the fate of his book/game. Debord committed suicide in 1994. Nevertheless during the '90s, his work gains more and more influence. The book/game is published again in 2006 by French publisher Gallimard (price: 18 €), but it's only a book (in French), co-signed by Debord's lifetime partner Alice Becker-Ho.

The game uses a mapboard containing 500 squares (25 x 20) divided in two by a border line. Each territory has 2 arsenal squares, 3 fortress squares, and 9 mountain squares (blocking movement,shooting and communication lines). Setup of units (infantry, cavalry, artillery, horse artillery) is free and secret. At his turn, each player may move up to 5 units and/or attack. Aim of the game is to completely destroy the enemy or conquer his 2 arsenals. No dice: combats are resolved taking into account the attack/defense ratios of the opponents (unit retreats from -1, and is destroyed from -2) Communication lines are critical.

The English translation published by Atlas has a faulty translation of the rules, making it more or less unplayable.