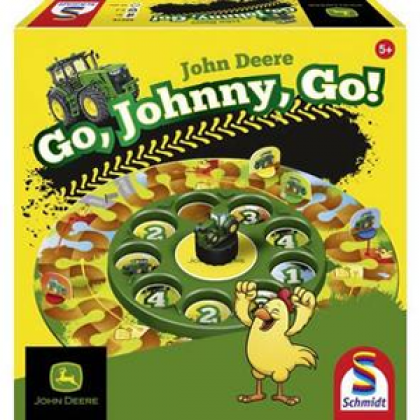 Goal
Be the first to cross the finishing line with your tractor.

Setup
The circular board - showing a racing course - has a circular plastic panel in the middle, with a tractor in the center. Around the central tractor, there are 9 circular recesses into which the action disks are placed in random order. The action disks show the numbers 1-4, a "muddy puddle" symbol or "Johnny the tractor". Each player gets a cardboard token and places it on the starting line.

Game play
Players take turn placing the plastic Johnny toy at the center of the plastic panel and press it down. It rotates and turns until it lands in one of the recesses. The action disk in the recess Johnny landed in determines the action of the active player. On numbers 1-4, the player moves his/her token the corresponding number of spaces towards the finish line. "Muddy puddle" means you're stuck this turn and all other players get to move one space. If Johnny lands on the "Johnny the tractor" disk, the first player to call out "Go Johnny go!" gets to move one space forward.
The racing course also has special action spaces: shortcuts and spaces where you have to move back several spaces.

The player whose token crosses the finishing line first wins the game.