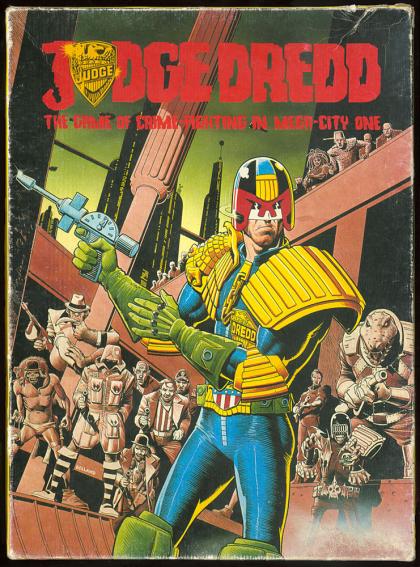 (FROM THE BACK OF THE BOX) "Mega-City One, a vast metropolis of the 22nd century, where more than 800 million citizens live on a knife-edge of tension. Crime is a way of life for many, but one fact can be relied on - JUDGE DREDD is the law! He's the toughest lawman of them all. Whether the crime is littering or murder, no one escapes his justice. Now you can join JUDGE DREDD in this fast-action game of crime fighting in Mega-City One. You can arrest the Angel Gang, Judge Death, Orlok The Assassin and other notorious lawbreakers - but look out, they're tough, and sometimes you might need a robodoc to fix you up."

Players attempt to arrest perps within Mega-City One. Crimes and perps are randomly selected and players must combine action cards and their Judge's Combat Factors with die rolls in order to beat the perps. Victorious Judges take the perp and crime cards and keep them in-hand until the end of the game where totals are compared to determine the winner. Judges defeated in arrest attempts must spend time healing in the Intensive Care Unit.