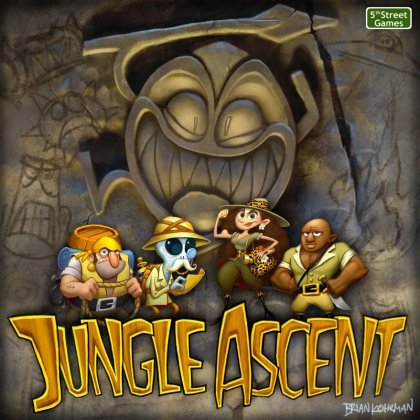 Game description from the publisher:&#10;&#10;Deep in the jungle of the mysterious Oobydoobies, high atop the Cliff of Frab, your expedition has discovered an incredible treasure that will grant the owner amazing power! But, what's this? No one in your group wants to share the treasure! Use your supplies, your wits, and some ancient magic left by the Oobydoobies to build a path to the top of the Cliff of Frab. Crush, roast, or explode your opponents, and try to claim the treasure before anyone else!&#10;&#10;Jungle Ascent is a racing game in which players must build a pathway up the perilous Cliff of Frab with ladders, bridges, and conveyor belts while sending opponents tumbling down with hazards such as Fireballs and Crushers. Action cards such as Speed Juice and Construction will also make players' lives a bit easier during the climb.&#10;&#10;The first player to scale to the top of the Cliff of Frab claims its untold treasures and wins the game!&#10;&#10;