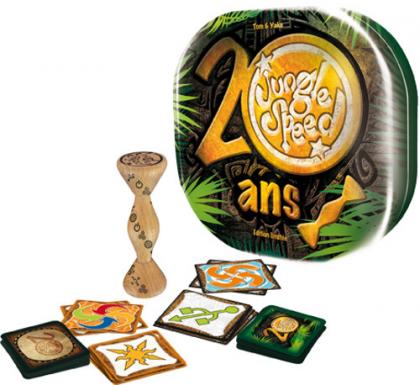 Gameplay remains the same as always: Shuffle the cards and deal them out as evenly as possible among all players. Set the totem in the middle of the playing area. Players take turns flipping one card at a time from their personal deck onto a personal discard deck. If two face-up cards show the same symbol, the players of those cards race to grab the totem, with the first grabber giving his stack of face-up cards to the slowpoke. Special cards mix up who should be grabbing what when to keep players on their toes. Whoever runs out of cards first wins!

Jungle Speed: 20 Years comes packaged in a special golden case with a golden-backed version of the original card deck as well as a new card deck and a wooden totem.