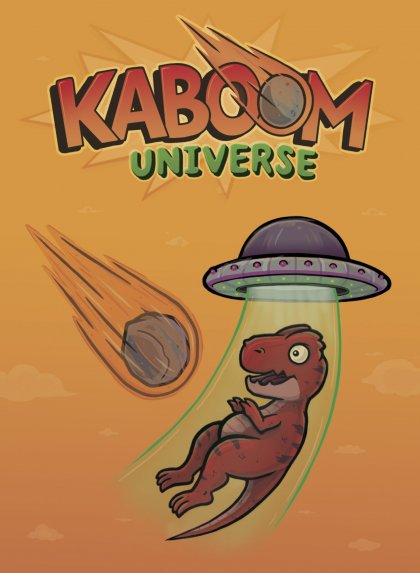 66 million years ago,&#10;When asteroids threatened the Earth, bounty hunter aliens came to Earth to rescue dinosaurs and exchange them for rewards offered by their alien leader, Glorb.&#10;&#10;Each player will play as an alien and every turn may choose to:&#10;-Rescue a Dinosaur (5 different species) &#10;-Play an Action card &#10;-or Draw a card&#10;&#10;But be careful! Because if you draw an asteroid card, it could hit your dinosaurs and those rescued by the players sitting next to you. You must roll the asteroid dice and hope for dinosaurs to survive the strike, unless you have a divert asteroid card that sends the meteorite directly to a player of your choice.&#10;&#10;A game of Kaboom Universe consists in 3 rounds of play, each one will finish when the unexpected Kaboom card appears.&#10;The alien/player who collects more rewards after these 3 rounds will earn the BIG reward... keeping a T-Rex as a pet!&#10;&#10;-description from designer&#10;&#10;