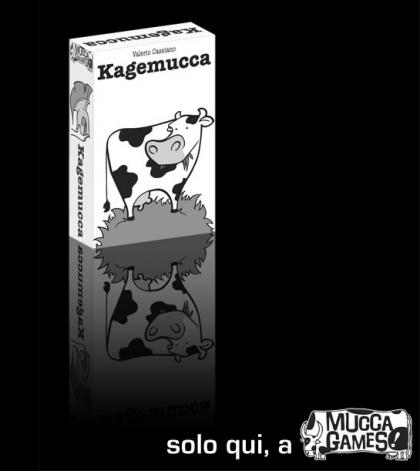 The funniest cow war in the world... the Mucca Games party game!

Each player receives a set of cows (Elite, Rookie, Cow Waste "Vaccacca") and place the cards face up. Each player studies the placement of the other players' cards, then the cards are covered.
The current player attacks another players' card with one of his cards: if they are of the same kind, nothing happens; elsewhere, the battle is resolved using the "Rock-Papers-Scissors" rules: the Elite beats the Rookie, the Rookie beats the Waste, the Waste beats the Elite.
The winner takes the losing card as a point; the winning card cannot be attacked during the next round (current player passes clockwise).

Kagemucca was introduced in Mucca Games in 2006 by the author, Valerio Cassiano, who managed the First World Kagemucca (Preview) Tournament.

Kagemucca was produced by Mucca Games and daVinci Games in 2008, with the help of the Cassiano family, and of many Mucca Games friends.

The cows on the cards are illustrated by: