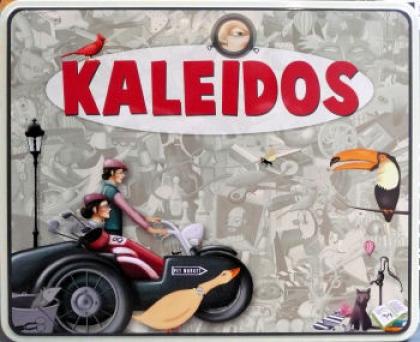 The game comes with four identical sets of ten paintings, each depicting a scene packed (to greater and lesser extents) with various objects. Each of up to four players or teams uses their own set, so there’s no craning around to see the picture at the far end of the table. In fact, spiffy cardboard easels prop up the scenes nicely so they’re easier to view. Everyone loads identical scenes onto their easels and a deck of cards provides a letter for the round. Everyone gets sixty seconds to write down as many things beginning with that letter as they can find in the scene. Although each word can be used only once - a football and baseball wouldn’t count as two BALLS - an object can be used multiple times for different words (e.g., BASEBALL, BALL). Once time has expired, players read through the lists. Any object on multiple lists scores one point for those who wrote it. Any item unique to a single list scores three points. When all lists have been scored everyone advances to the next scene and a new letter is chosen. The high score after all 12 scenes wins.