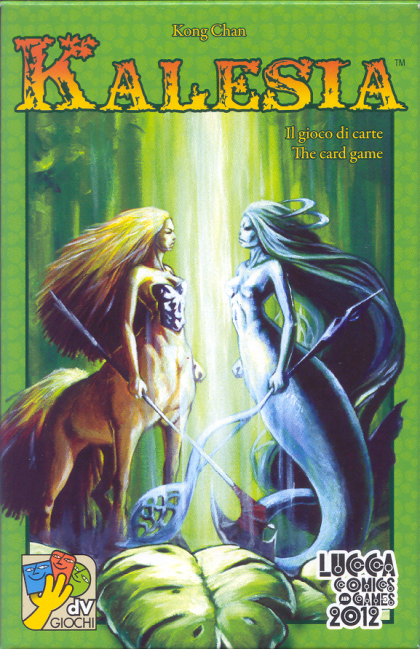 This game has been published by dV Giochi as a reward for winning the 2011/2012 edition of the Gioco Inedito – Best Unpublished game contest. Powered by Lucca comics & Games and dV Giochi, the contest aims to identify the best new card game design from all prototypes received and to reward it by publishing the game in a fully professional and high-quality format, overseen directly by dV Giochi. All prototypes submitted must conform to the technical and style requirements, fixed components and a given theme which changes every year. Everybody can join the contest and this is a great opportunity for emerging game designers to see their idea published.
For more information:
giocoinedito@luccacomicsandgames.com
www.luccacomicsandgames.com

"In the forest of Kalesia, the Centaurs and the Mermaids compete for the perfect place for a new temple. But can they overcome the spells of the Queen of Kalesia, who wants to exile all of them from the woods?"

In Kalesia you are secretly part of a mystic alliance. Use your magical weapons to conquer areas of the forest, securing the perfect temple site for your Alliance. But be careful! The weapons you don't use are passed to your rivals, so that good fortune (and information!) will spread around...

Players all hold cards for all three factions competing over the forest (a grid of cards) and must play cards each turn. The faction with the highest total from the played cards wins the section currently being bid for. A faction wins by getting three sections in arow. The first twist is that players' factions are secret. The second is that players pass unplayed cards to the next player after a few turns and take back the cards they played.