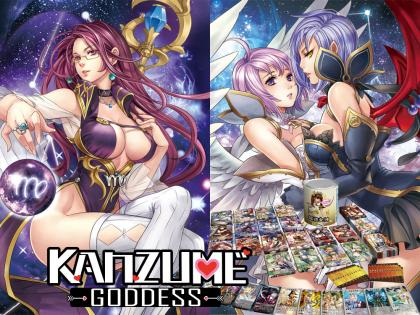 It was the age of gods and goddess. Zeus (King of the Gods), Poseidon (Lord of the Seas), and Hades (God of the Underworld) had agreed to separate the sky, the ocean, and the underworld. Athena, the Goddess of Wisdom, would take over the rest of the earth. But the Norse gods were displeased by the decision. They called warriors and disciples to take the world from the Greek gods. The gods atop Mt. Olympus also called their warriors to defend them. During this war of the gods, a mass of warriors died, and their souls were sealed in a jar.

And now they are waiting for you to release them.

In the deck-building game Kanzume Goddess, you will be one of the Gods of mythology. Each God in the game has its own special powers which players can use to their benefit. Players will purchase cards from the center of the table to add to their decks. They will use these cards to purchase more cards and to do battle with the other players. These cards can be used to damage other players, to gain more cards, to draw more cards from your deck, and to protect yourself from damage. The last player with energy left is the last God standing and the winner of the game.

Kanzume Goddess can be played as an individual match with 2-6 players or as a team match if you play with 4 or 6 players.