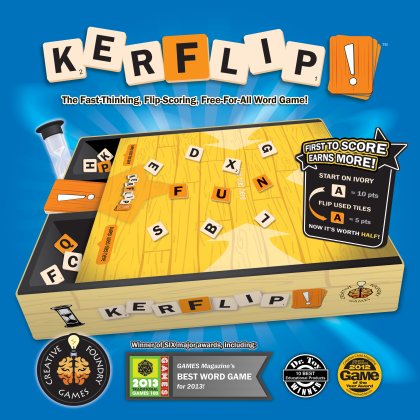 KerFlip! is a fast-thinking word game that rewards you for making anagrams from a group of letter tiles faster than your opponents can. At the beginning of each round, players simultaneously drop a predetermined number of tiles onto the board, then quickly flip them all ivory side up. (The fronts of the tiles are ivory, while the backs are orange.) At this point the round is a free-for-all, with players racing to call out one word each. If the last player is taking too long to call a word, any of his opponents can &quot;hurry&quot; him by starting the timer; if he doesn't call out a word in 15 seconds, he busts, scoring nothing.&#10;&#10;Once every player has called a word for the round, they score points in the order they called out the words, so the first player who called scores first, the second player second, etc. The first time a tile is used &ndash; that is, while its ivory side is face-up &ndash; the tile is worth 10 points. Once it's been scored, flip (or &quot;KerFlip&quot;) it to its orange side, reducing its value to 5 points for all other players who used it in the same round. Some tiles, identified by a small number in the bottom right corner, are &quot;premium tiles&quot; that award players cards with bonus point values.&#10;&#10;At the end of each round, return any unused (ivory) tiles to the draw pouch and sweep all used (orange) tiles into the collection chutes in the game box. The game lasts 15-20 minutes (about 10-12 rounds) depending on the number of players (2-4). To clean up at the end of the game, pick up the game box and gently shake it to funnel the tiles into a collection cup under the board.&#10;&#10;