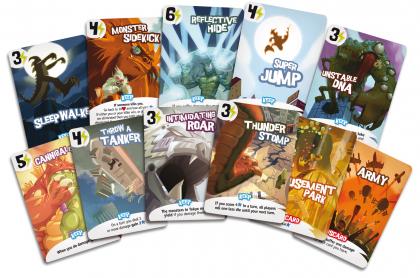 The King of Tokyo Promo Cards are a set of 11 cards to be added to those in the King of Tokyo base game. They are simply shuffled in with the base game cards, adding more variety from game to game.

The French versions of the cards are available individually through several outlets, while the English cards are packaged as a set to be distributed via local tournament play and at conventions.

In 2011, 9 of the 11 french cards can be obtained directly from IELLO during their Japan aid operation (Unstable DNA and Thunder Stomp cards were out of stock before the operation).

English and French sets of 11 promo cards have been printed again in may 2013 as a reward given to all contestants in official King of Tokyo tournaments.