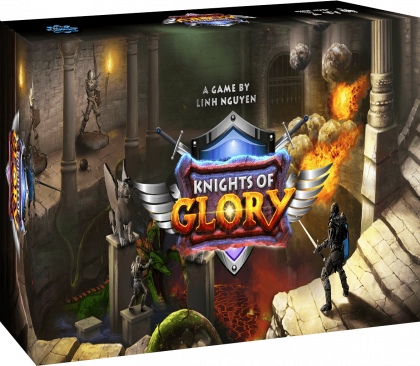 NOW AVAILABLE FOR PURCHASE: https://bluegeargames.square.site/product/pre-order-knights-of-glory/6&#... STORY&#10;~~~~~~~&#10;A long time ago, kings, knights, and peasants all lived for a common purpose: kings ruled the land, peasants served their king, and knights defended their kingdom. Beyond the seas, beyond the woods, and beyond high mountains was a fortress ruled by a stern and powerful king. This stronghold was unbreakable and the king's army was undefeatable.&#10;&#10;Every year the king held an event called &quot;The Royal Games&quot; for his noble subjects to train to become highly skilled knights. Beneath this fortress lay a dungeon used to test their wits and strength. These knights faced rigorous obstacles including traps, weaponry, and psychological tactics. Only the most resilient knights prevailed. Whoever was worthy during the treacherous journey earned the rank among the king's elite.&#10;&#10;&#10;OBJECTIVE&#10;~~~~~~~&#10;In Knights of Glory, you play as one of the king&rsquo;s knights seeking the ultimate goal of becoming a Royal Games victor. Advance through a treacherous dungeon through the art of bluffing. Each player will try to make their way to the exit through deception and deduction. More than one knight may prevail. Exit the dungeon to win the Royal Games and become Elite Knights.&#10;&#10;&#10;TURN OVERVIEW&#10;~~~~~~~~~~~&#10;The most experienced knight will play first. Play then proceeds clockwise around the table, with each player taking a series of actions until the game ends.&#10;&#10;At the beginning of the game, the first player will take the Rook piece. A game of Knights of Glory is played over several rounds, each consisting of three phases:&#10;&#10;Action Phase&#10;Voting Phase&#10;Refreshing Phase&#10;&#10;&#10;TURN IN DETAILS&#10;~~~~~~~~~~~&#10;&#10;ACTION PHASE&#10;&#10;1) Pass - Pass your turn to next player in the rotation. This will end your turn.&#10;&#10;2) Discard - Discard your Weapon cards face-down up to or equal to the Tier Level you are currently on. This will end your turn. Example: If you are on Tier 2, you may discard up to 2 cards. All discarded cards will be placed in a pile known as the &ldquo;Discard Pile.&rdquo;&#10;&#10;3) Advance - Advance by looking at the Destination card ahead of you. If the card is face-down, reveal it by flipping the card over to see what trap you must overcome. Roll as many Weapon dice as shown on the Dice Indicator and play a Weapon card or KOG token for each dice. If you were successful after the Voting Phase, you may decide whether to push your luck and perform one of your turn actions again.&#10;&#10;VOTING PHASE&#10;&#10;Players will vote to determine if your play was the truth or a lie. If you were telling the truth and Players disagree, you will reveal your Weapon Cards and advance as normal but Players that disagree will retreat back to the previous Destination card. If you were bluffing, you will reveal your Weapon Cards and retreat back to the previous Destination card and Players that disagreed will advance to the next Destination card. Players who agree will do nothing. If all Players agree you will not reveal your cards.&#10;&#10;REFRESHING&#10;&#10;When the last player&rsquo;s turn ends, it is time to start the new round. The player in last place on the Destination Cards is now the first player in the new round and will claim the Rook.Players will keep any remaining cards that they still have. It is time to replenish every player&rsquo;s hand back to 5 cards again.&#10;&#10;&#10;GAME END&#10;~~~~~~~&#10;&#10;There may be more than one winner. When a player successfully arrives to the Exit Path, they are considered the winner, but other players have a chance to win as well and play one final turn. The game continues, starting with the next player in the rotation.&#10;&#10;Each time a player successfully advances to the Exit card, the Journey Paths will gradually collapse starting with the Cell, Start, and all of Tier-1 together; and then, when another player wins, Tier-2; and finally, Tier-3. If players are standing on a collapsed Destination card, they are eliminated from the game.&#10;&#10;When all the Tiers collapse or the last player fails to exit, the game then ends, and players that successfully advanced to the Exit card are considered the winners as well.&#10;&#10;