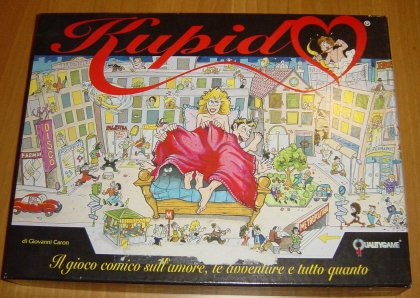 Kupido is a humorous game about love affairs. &#10;Each player distributes his points among six characteristics: Physical appearance, Culture, Charm, Money, Feelings, Eroticism. The first four of those scores are public the last two are secret. &#10;Each player also fixes the minimum scores for each characteristic of his/her ideal partner. &#10;The board depicts a city, divided into hexes. Players wander on it, looking for their ideal mate: a character of the opposite sex whose 4 open scores fits their secret goals. In the meantime, their own scores change: in the Gym the physical appearance increases (if there are no accidents...) while in the Fast food it can suddenly drop down!&#10;When two characters suit each other with their 4 open characteristics, they can make a couplet. They then move together with a 4-sided die (instead that alone with a 6-sided one) until they reach a private house or a hotel. At this point they can show each other the two secret characteristics: if they don't fit they split apart. But if they fit, they win as soon as they reach the Cathedral or the City Hall.&#10;Each hex of the map and each playing card has a humorous comment about each game effect.&#10;To play, you do not need to have the same amount of male and female characters: you only need at least two males and two females. A rare quality of this game is that player can enter the game later or go away before the end with no problems.&#10;&#10;