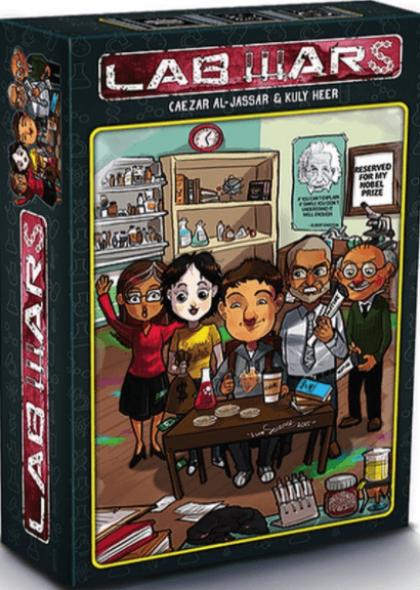 Lab Wars is the science themed card game of building up your lab and sabotaging your competitors all for scientific glory!&#10;&#10;How to play:&#10;Players start play with a research team of 5 lab characters and 3 lab item cards in their hand. At the beginning of each round players will reveal which character they will be playing in a rock, paper, scissors mechanism. When it is the player's turn their character activates an attack (a resource bonus) if another player has played the targeted character and an extra character specific bonus. If a player is successfully sabotaged they also gain a sabotage card decreasing their &quot;Impact point&quot; total (see end).&#10;&#10;Players will then purchase lab item cards into their lab area from their hand. Lab items can combine to create combos which give the player more research points of the drawing of more cards. Players may also play action cards which have variable effects. Players gain action cards by the successful sabotage of another player or by playing the professor card.&#10;&#10;If players have enough research points they can purchase from an open supply of 3 different &quot;impact cards&quot;. They become more expensive to purchase as they get bought up. Players need impact cards to give themselves impact points which are needed to win the game.&#10;&#10;Once the player has finished their turn the next player has their turn. Once all players have finished their turn players start over and reveal which new character they will be playing that round. From the beginning of the second round and future rounds each player receives 2 research points and 1 lab item card from the lab item deck.&#10;&#10;How to win and end the game:&#10;The game ends at the end of the round when 2 of the 3 supply cards have run out, with the player with the most impact points winning the game. Bonuses are also given to those with the most remaining research points, lab items in their lab area and Nurture paper impact cards.&#10;&#10;