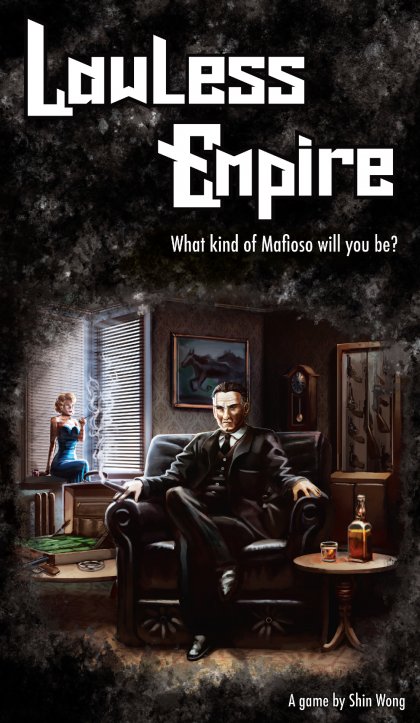 Overview:&#10;A game of Lawless Empire transports you to the seedy underworld, where you walk in the shoes of a Mafioso, vices and all.&#10;&nbsp;&#10;Using the unique dice mechanics of the game, you will scheme, bribe, extort, recruit, and command syndicates in order to fulfil your persona agenda, winning only if you meet more conditions stated on your hidden Mafioso card than other players by the end of 5 rounds.&#10;&#10;There are many paths to victory; strategise by building your empire with filthy lucre, or recruit&nbsp;various soldati to carry out your dirty jobs and dominate the syndicates early. To emerge triumphant, you must learn to negotiate and manipulate your opponents ruthlessly.&#10;&#10;Gameplay:&#10;Each player is dealt a hidden mafioso identity (E.g. Godfather, Don, Informant) at the start of the game. Scoring conditions are specific to each identity, and the score for each player will be tallied after 5 rounds of gameplay.&#10;&#10;Much of Lawless Empire revolves around dice placements. Dice are tactically allocated to the various plans in the fight for bribery tokens, lucre tokens, new soldati, and control of syndicates.&#10;&#10;Players can ask for assistance from other players after they gain control of a syndicate. Controlling or assisting a syndicate will allow players to give hidden orders to the syndicate. There are 2 types of orders with varying strengths: to secure or to sabotage. Orders given to syndicates will be revealed at the end of 5 rounds to determine if each syndicate is secured or sabotaged. Depending on your mafioso, you will score based on how many syndicates are secured or sabotaged, and/or whether you control or assist the syndicates.&#10;&#10;The distinctive feature of Lawless Empire shines through its workings of dice control and interactions, abetted by soldati power and scheme cards. Concealed scheme cards are played on each plan by the players, sneakily altering how each individual plan is won. For&nbsp;example, a plan is normally won by the player with the highest total value of dice allocated to it, but the &ldquo;Underhand Attacks&rdquo; scheme card dictates that the player with the lowest total value wins instead. On the other hand, your soldati will grant you the ability to control the dice (including your opponent&rsquo;s) after their placement (e.g. to move or exchange dice around plans, or even rotate a dice to any value). This combination of allocation, scheme cards, and soldato abilities presents a fresh take on the otherwise luck-dependent dice mechanics, thus ensuring a thrilling and compelling game without repetition.&#10;&#10;The hidden elements in the game (mafioso, scheme cards, syndicate orders) provide a good setting for players to bluff, negotiate, persuade, and trash talk. However, players who are intimidated by such interactions can be assured that the game can be won by outwitting everyone.&#10;&#10;