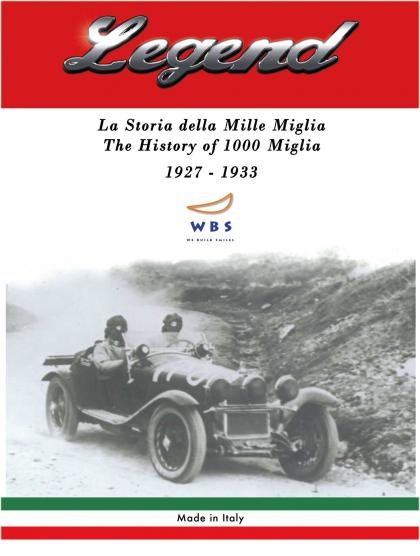 Legend: History of 1000 Miglia is the first title of a game series that will cover the history of the legendary car race across Italy from 1927 to 1955, starting from Brescia, then going to Rome and back. In particular, this first chapter covers the first years of the competition, between 1927 and 1933, when the biggest cars brands – Alfa Romeo, Lancia, Mercedes, etc. – struggle against all the odds in that tough race of 1000 miles (1000 Miglia, in Italian) in the worst conditions ever in the history of car racing and technology.

The 15 stages are realized by a combination of large hexagons, which represent the Italian countryside and its typical winding roads.

Particular attention was paid realizing a "playful simulation" in which all 19 cars featured in the game have their own characteristics, historically and technically recreated, after long research and interviews with the actual drivers of each car. So every car features its handling, engine performance and reliability with the goal of finding the right trade-off between simulation and entertainment.

The driver prepares his car to the race, acquiring spare parts and abilities that will help him along the way. He plans his speed for the turn and moves along the track dealing with different kind of curves, altitude gradients. He has to manage his car through 1000 miles of race, facing technical issues (14 different mechanical area of the car has been covered to model damage and mechanical wear!), changing weather conditions, daylight and nighttime, racing against the other drivers directly side-by-side and against their timing.

Who arrives back in Brescia with the fastest time wins the 1000 Miglia.

Previously known as 1000 Miglia: Dawn of the Myth.