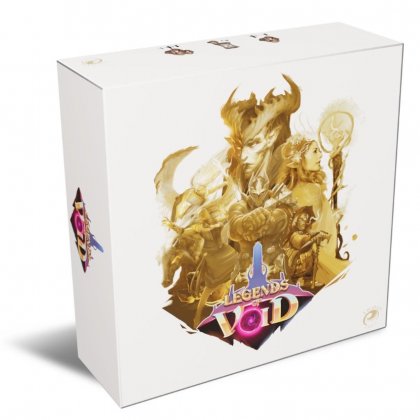 &quot;The world as we know it is falling apart.&#226;&#128;&#169;&#10;It started out with the appearance of the Void. That day the ground trembled like during an earthquake, the sky became darker and the light started to fade away.&#226;&#128;&#169;&#10;Now rivers are dry and the Outer Lands do not grant their fruits anymore. Fields are no more covered in green and our children grow weaker and weaker as time passes by.&#226;&#128;&#169;&#10;Nihil is all over us.&#10;&#226;&#128;&#169;We cannot wait anymore. &#10;&#226;&#128;&#169;We must stand against the Void. &#226;&#128;&#169;&#10;It is time to prove if any of You deserves to be called a Hero. &#10;&#226;&#128;&#169;Lead Your Faction in the battle against the Void. &#226;&#128;&#169;Become a Legend with its defeat &#10;&#226;&#128;&#168;...or just fade away, forgotten by all, in an unsuccessful attempt.&quot; &#10;Leafly, Elder Druid of Nimali, speech to the XXVII&deg; Factions Ring&#10;&#10;In Legends of Void, You play a Hero, who leads a Faction in the battle against the Void and its Three Seraphs, god-like creatures summoned from other dimensions. They are draining the life out of the Outer Lands in exchange for nothing, for Nihil! &#226;&#128;&#169; &#10;All of You want to save the Outer Lands from the grip of the Void. To defeat the Void, You have to banish all its Seraphs. But You compete for the prestige of Lumen - the Flying City of Eternals, rulers of all the known Lands. &#10;Lumen will grant the title of Legend to the best of You. Your contribution to the fight against the Void and Your effort to increase Lumen's fame will make the difference. &#10;During the game, You can acquire Lumen Scrolls by buying them for Your hand. There are over two hundred different Scrolls, they can represent anything: summoning an animal familiar, gathering magical Goodberry, calling Centaurs for help, or casting a Fireball. Scrolls usually have immediate effects, like increasing Your productions, empowering the actions Your Hero can perform in the Summer, or granting exclusive activations and abilities.&#10;&#10;Buying a Scroll from Lumen is costly, so there is a balance between buying Scrolls - 3 Gold each - and playing them, which can cost anything between 0 to over 40 Gold. Some Scrolls may also require other resources different from Gold. Some Scrolls may have requirements based on Your knowledge of a discipline (Arcana, Mana, Spirit, and others), or Your Alignment (Law, Chaos, True Neutral), or where Your Hero is (on a Stronghold, next to Nihil). Standard Actions, one for each type of resource, are always available to complement Your action's choice.&#10;You keep track of Your productions and resources on a personal board. There are six types of resources: Gold, Mana, Dark Matter, Genasi, Mithril, and Hero resources. Only four of them can be produced directly: Gold, Mana, Mithril, and Hero resources. Genasi descends from Dark Matter, which is obtained from Mana.&#10;Your basic income, as well as Your base score, is based on Your Lumen Rating (LR), which starts at 13 and increases whenever You damage a Seraph. You can damage Seraphs in many ways: fighting like the Hero You are, sealing a Portal, blooming a Vytae, scorching a Nihil, or through Your Scrolls/Faction/Hero. &#10;Damaging a Seraph is the only way to raise Your Lumen Rating and will increase Your chances of victory. But You can also win by accumulating Lumen Prestige (LP), as long as the other Players strive to ban the Seraphs from the Outer Lands. &#10;The Outer Lands, represented by a modular map, are different in every game, as they are made up of six Regions randomly chosen over eight double-side options. The Void occupies the center with its Three Seraphs threatening every Region. Here and there, Portals infect the earth. Meanwhile, in a Stronghold on the edge of the Lands, You are preparing for the battle against the Void.&#10;&#10;In the Outer Lands, time is measured in years. Each year has four seasons, which are also the phases of the game:&#10; - Spring Draft: when You draft 4 Lumen Scrolls and then decide which Scrolls to acquire for Your hand;&#10; - Summer Activity: in which You take turns performing two actions at a time from these options: play a Lumen Scroll, perform a Hero Action (Move, Gather, Fight a Seraph), make a Standard Action (7 Gold to draw a Lumen Scroll, 7 Mithril to build a Stronghold, 7 Mana to seal an active Portal, 7 Dark Matter to scorch a Nihil, 7 Genasi to bloom a Vytae), use an Activation (granted by a Scroll, Hero, Faction, Blessing or Secret), end Your Summer and take a new Lumen Blessing for next year;&#10; - Autumn Harvest: when You get resources according to Your Lumen Rating and production parameters;&#10; - Winter Time: in which a Seraph moves, spreads Nihil over the Outer Lands, and inflicts its lashes on all of You.&#10;&#10;After each Winter, a new Spring arrives, but sometimes Winter never ends. Keep in mind, the battle against the Void is a race against time. If the Void has enough years to grow, it erupts and swallows this part of the Outer Lands. The game ends with the scorn of Lumen for all of You, except the best of You in fighting the Void. The highest Lumen Rating claims the victory, nothing else matters (no LP from Strongholds, Rewards, and Eternals Scrolls).&#10;Otherwise, if You succeed in banning the Three Seraphs, the Outer Lands are safe. The game ends immediately, as it&rsquo;s time to celebrate. Add Your Lumen Rating to other LPs from Eternals Scrolls You have played, Rewards You can claim, and Strongholds You have built. The highest result is awarded by Lumen with the title of Legend of Void!&#10;&#10;&mdash;description from the designer-&#10;&#10;