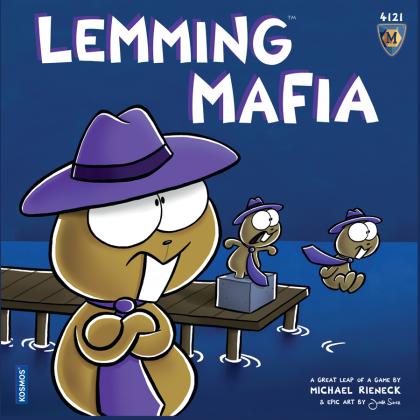 The third game based on the German web cartoon "Nichtlustig" by Joscha Sauer.

It features the Mafia Lemming characters from the cartoon.

From the publisher's website:
"Real lemmings want to jump off the next cliff.
Members of the different lemming mafia families aren't any different.

Because in the game, there is not only one, but six members of the suicidal species, they make a contest out of it:
They all run to the lake and the first one who jumps in the lake wins.

And it wouldn't be a real race if you couldn't place bets on the result!
Each player has his favorite lemmings and tries to use the dice results to influence the race."

Game Summary
Each player has 6 cards (1/lemming), and 2 mission cards (bonus VP at end of game). On your turn, roll two dice (sides show one of the lemming colors) then choose to move one of those lemmings (if one is out of the race, move the lemming in last place). Lemmings may move one track section at a time, to any unoccupied space in the next section. The spaces on the race track are one of several types (e.g., give a lemming concrete shoe; 2=dead, remove concrete, allow you to place bets, move a lemming, etc.).

Betting is interesting: each time, you have the option to bet. To do so, place a lemming card face down on top of your stack of bet cards; goal is to place winner on TOP of your stack (last bet placed).

The game ends when a lemming reaches the finish; place remaining lemmings in the order they are on the track. Mission cards score bonus VP if completed, or cost VP if failed. Then resolve bets: turn over your cards, then go through them getting 1 VP per card revealed until you get to winning lemming (max 6 VP).