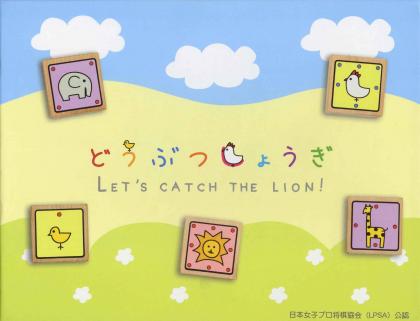 どうぶつしょうぎ - Let's Catch the Lion! (a.k.a. Dōbutsu Shōgi, which means "animal shogi") is a simple version of Shogi. Both players have only four pieces – chick, giraffe, elephant and lion – and they're trying to either catch the opponent's lion or move their own lion to the other side. The board is just 3×4 squares, so the game is rather short, aimed mostly at getting children interested in Shogi – but even if you're an adult, the game is enjoyable. As for how to play:

The giraffe moves like a rook, but moves only one space.
The elephant moves like a bishop, but moves only one space. (Interestingly, in Xiangqi and Tamerlane Chess, the elephant moves precisely two spaces diagonally.)
The chick is directly analogous to the pawn/soldier of Shogi, and is promoted to a full-grown chicken, equivalent to the gold general in Shogi.
The lion is analogous to a king, except that he can win essentially by promoting, as long as it doesn't leave him in check.
Even on this 3×4 board, you are still able to drop in pieces that you captured from your opponent!
Unlike in Shogi, you can drop a chick for mate or have two chicks in a column.