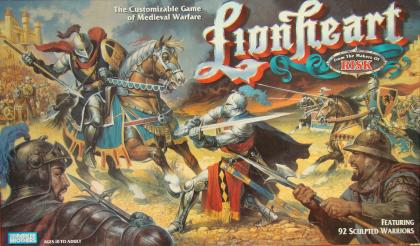 Lionheart is a simple wargame that is like chess but with dice rolls that determine the success or failure of a capture move. There are seven different units: King, Knight, Archer, Heavy Infantry, Infantry, Mercenary, and Peasant. Each turn players can perform any 2 actions: move, turn, or attack. Foot units move one square forward per action. Mounted units move as many unblocked squares in front of them as they like. Units attack the square they are facing (archers attack an area of squares in front of them). Attacks are resolved by rolling the combat dice. Each appropriate symbol rolled (axes or arrows) counts as a "hit". Scoring more hits than the target has hit points removes some of the units (miniatures) from the target army. The winner is the player who eliminates his opponent's King or eliminates every other warrior in his opponent's army leaving the King standing alone on the field of battle.