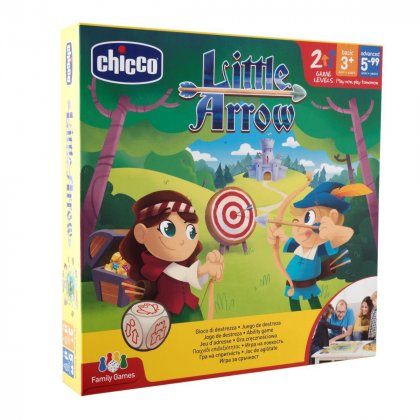 The forest is full of danger and treasure: close your eyes, jump, turn around and throw the arrow... Become the best archer and hit the best target, with your eyes closed!&#10;Place the board in the middle of the table and randomly place on it the 8 target shapes. The player stands in front of the board and rolls the special dice. The results will determine the way to shoot the arrow: turn around 360 degrees, take a step backwards and one step forward, jump 3 times on the spot, take a step to the right and a step to the left, stand on a foot, etc. Then, he takes the arrow, closes his eyes, raises it up and performs the action indicated by the dice while placing it on the board (eyes closed!).&#10;What did you hit?&#10;The castle: you conquer the castle card, even if another player already conquered it.&#10;A target: you conquer the target you hit.&#10;A score area of the board: you conquer a treasure tile of the corresponding value (if some are still available).&#10;The river: you don't conquer anything.&#10;The swamp: you have to discard one of the tiles you previously won.&#10;The game ends after the sixth turn terminates. Each player places the tiles and targets conquered during the match in a straight sequence: the player who forms the longest sequence wins.&#10;&#10;