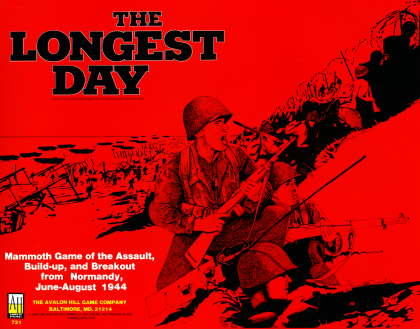 The Longest Day is tactical level Monster game depicting the assault, buildup, and breakout of the Normandy Invasion.

The game includes 2603 counters representing Battalion sized units and command units up to Corp level of the American and German armies in northern France. Seven map boards depict the invasion beaches and areas as far east as Cabourg, as far west as Coutances, and as far south as Avranches/Argentan. The counters are in the style of German WW2 military symbols representing armor, infantry, artillery, assault guns, bicycle units, etc. Five separate scenarios are presented using the programmed instruction approach learning only what's needed to play a scenario before moving on to the next scenario.

Once all the rules have been learned then the campaign game is played which can take up to several months to finish.