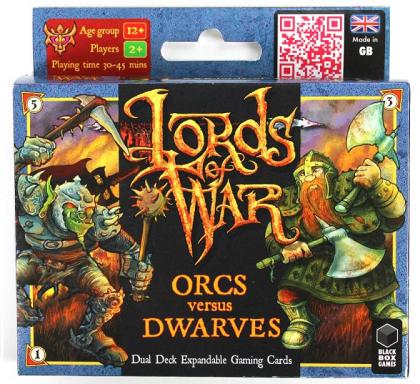 Lords of War: Orcs versus Dwarves

Orcs versus Dwarves was the first Lords of War game to be released, in December 2012, at the Dragonmeet Game Fair in London. The game went on to win the Best Strategic Card Game Award at the UK Games Expo 2013, along with Lords of War: Elves versus Lizardmen.

During Lords of War battles players use hands of 6 units, drawn from their total 'army' of 36 cards, playing one card per turn at the start of their turn.

Cards have unique formations of Attack Arrows on their edges and corners signifying which adjacent cards they attack once played, and the damage they will do. Some cards also have Ranged Attack values. Each card then has a Defence value which, when exceeded by attacking cards, sees that card defeated.

At the end of a player's turn, once combat has been resolved, the player can then either draw a new card from their army deck to return their hand back up to 6 or retreat a unit that has not engaged in combat during that turn.

The game is playable out of the box and contains two complete armies - the Orcs and the Dwarves.

These factions are differentiated by their exclusive cards and strategies; the Dwarf faction plays more defensively, using some Ranged cards and powerful Berserker units to pick-off assailants, while the Orc army encourages players to attack more vigorously, often committing kamikaze moves to their tactical advantage.

Orcs versus Dwarves is cross-compatible with Elves versus Lizardmen, meaning that all the Lords of War armies can be used to battle one another. The armies can also be blended together, using a strict Ranking System, to create Mercenary decks for tournament play.