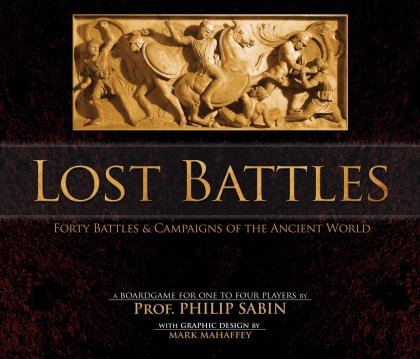 &quot;Lost Battles&quot; is forty games in one. The game covers battles and campaigns in the Mediterranean and Near East from the Persian defeat at Marathon in 490 BC to Caesar's victory at Pharsalus in 48 BC. It has been exhaustively tested and refined over the past several years, and is based on Professor Philip Sabin's decades of research and simulation design on ancient warfare; and it includes an updated copy of his book, with extensive historical and design notes on every scenario.&#10;&#10;The game can be fought on three levels - the grand tactical, the grand strategic, or a combination of the two. At the grand tactical level, 1 or 2 players may refight any of 35 different land battles such as Leuctra, Gaugamela, Raphia, Cannae, Cynoscephalae or the Sambre - far more than in any other single boxed game. At the grand strategic level, 1 to 4 players may refight the epic duels of the two centuries from 350 to 150 BC, starting with the eclipse of Achaemenid Persia by Alexander of Macedon, and ending with Hannibal's campaigns and the conquest of Carthage and the Hellenistic states by the resurgent Roman republic. The most ambitious games combine these two levels, and see 1 to 4 players using tactical battles to resolve strategic campaigns across part or all of this two century period, or else refighting a series of historical battles to decide conflicts such as the three-cornered contest for dominance between Athens, Sparta and Thebes from the start of the Peloponnesian War to the death of Epaminondas.&#10;&#10;The accent throughout is on combining historical accuracy with speed and accessibility. The free-standing strategic game may be completed in just 30 minutes, while individual land battles may be re-fought in two hours or less. There is constant player interaction, and a series of tortuous dilemmas - how should the scarce command points be allocated across the battlefront, which troop types should be put in the lead against particular opponents, should units attack all-out at the cost of becoming exhausted themselves, and should generals join the fighting to rally their disheartened men at the risk of being killed and so making things far worse? The game includes all the many troop types from hoplites, legionaries, phalangites and archers to cataphracts, scythed chariots and war elephants, and it includes simple rules to reflect the huge differences in generalship and troop quality and to allow outclassed armies to win a handicapped 'game victory' even if they are defeated on the field, as long as they do better than they did historically. All aspects of the game are avowedly solitaire-friendly, and can be run by a single player swapping sides just as easily as by one or more players per side.&#10;&#10;Tactical battles are fought on a 5 x 4 grid of full-colour 5 inch square hard mounted terrain tiles, which dovetail to form any desired battlefield. The individually die-cut counters have rounded corners and are also in full-colour; they depict the various different troop types. The strategic game is fought on a hard mounted map showing the area from Spain to India.&#10;&#10;