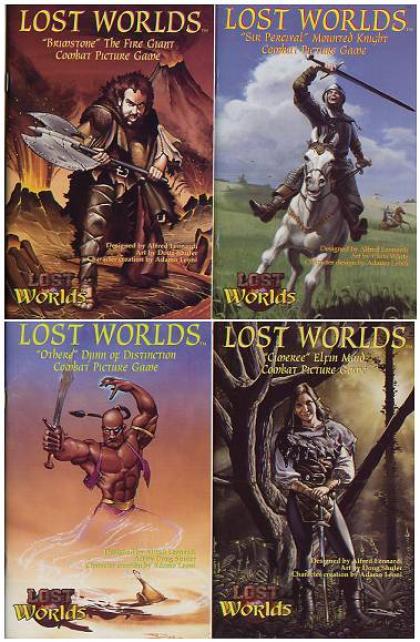 Lost Worlds is the most popular entry in Alfred Leonardi's line of book games, which also includes Ace of Aces. Each player has a character card and a booklet (and sometimes special Tactics, Luck, or Spell cards) for one of about fifty (and growing) medieval-fantasy characters. Characters can range from barbarian warriors to animated skeletons to elven archers to unicorns — even two different dragons. Booklets are traded and, as each player selects a move, a reference grid in the books determine the results (wounds, off-balance maneuvers, and so on). Combat continues until one fighter or the other expires.

An interesting feature of the Lost Worlds system is that, under some versions of the rules, characters may improve their abilities as they gain experience. In theory, you are supposed to keep track of your progress with each character, and if one is utterly killed, it will have to start over without its improved skills.

Part of the Lost Worlds series of books.