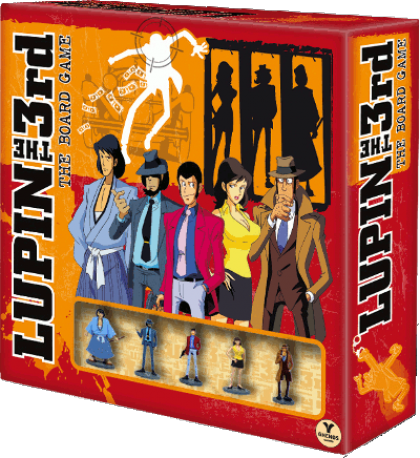 Lupin The Third brings the characters of the decades-old manga series Lupin III, created by Kazuhiko Kato, to the game board, with players taking the role of one of five characters from the series, each represented by a colorful miniature:

Lupin The Third has elements of a reverse Scotland Yard in that one of the players will control Inspector Zenigata and be visible on the game board along with his team of police agents, while the other players will work together to try together to steal the treasure and escape; these players are visible only when within view of Zenigata and the police, but both sides can use tricks to misdirect the other. What's more, as in the comic, Fujiko Mine can betray the group to try to escape with the treasure on her own!