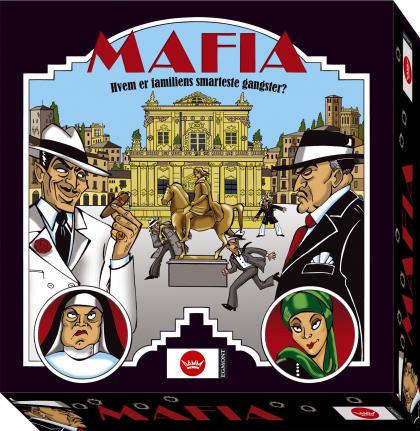 (Translated from the box in Norwegian)

Mafia - Who is the family's smartest gangster?

Sicily 1948: An old family feud makes the streets of the otherwise lazy village Calzone unsafe.
Two rivaling mafia families are fighting for control of the city, and they use all means available.
The major is corrupt, the police powerless and the villagers despair...
In the game Mafia the goal is to become the new Godfather in Calozone's underworld.
By placing mafioso pieces on strategic places you try to get control of 5 of the city's 9 areas before your opponent.
If you play your cards right, you may capture your opponent's pieces and make them your own. But beware: One smart move may create a chain reaction on the board, and the road from success to fiasco is short...

Mafia may be played as an exiting duel game for 2, or as a fierce team game for 3 or 4 players.