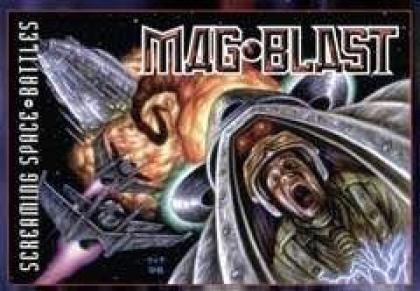 Mag-Blast is a space-themed card game in which each player tries to blast the other players from the universe. Each player assumes command of a race of beings whose powers are signified by the Flag Ship card at the center of their battle formation. The Flag Ship is surrounded on four sides with attack ships from the Ship Yard, up to 3 ships per side. On your turn you discard cards, draw back up to five, call for reinforcing ships (by playing combinations of 3 cards), and then play as many attack and defense cards as possible. Once you blast away an opponent's outer ship protection, you may attack his Flag Ship, hopefully destroying it, and eliminating it from the game.