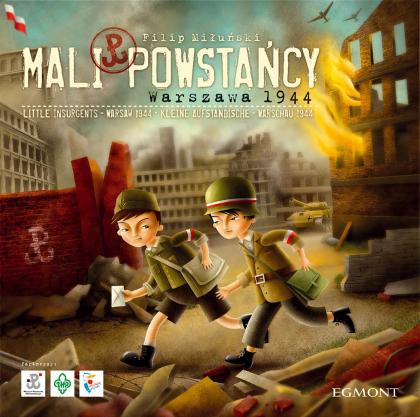 “Little Insurgents: Warsaw 1944” is a eurogame about scouts delivering orders during the Warsaw Rising in Poland in 1944, when the people of Warsaw rose against the Nazis occupying their city. Young boys worked as a couriers delivering letters and orders between squads of rebels, running through the underground sewage canals of Warsaw. Many of them died on that duty.

In “Little Insurgents” each player takes command of a unit of three Scouts with the goal of delivering the most orders on time. The scouts from different units are racing against each other to be first, but they also have to co-operate. If the order is not delivered on time crucial parts of the city, or even whole districts can be lost to the occupiers. If too many orders fall into hands of the enemy all players lose.

The game comes with two variants of rules: basic and extended, with basic being easier and involving more random elements. It is suitable for young players and families. The extended variant, dedicated to adults and gamers, involves special actions, more planning and secret goals.

The game will be published by Egmont Polska in the autumn of 2009 with rules in three languages: Polish, English and German.

The game was developed in cooperation with Polish Scout Association (ZHP) and the Warsaw Rising Museum.