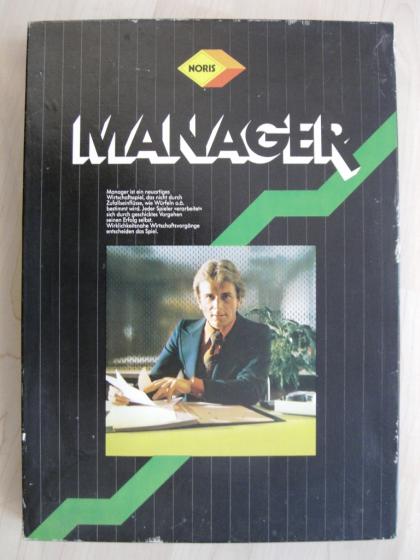 Manager is a deceptively simple game of economics for up to six players. Each player is the manager of one of the six companies, which are supposed to be manufacturers competing in the same market with identical products. (It is strongly hinted that the products are computers.) The player is responsible for setting the sale price of his product, buying machines to automate production, and buying or selling stock in any of the six companies.

The object of each round--usually--is to charge as much as you can for your product without charging too much more than everyone else. Every turn starts with the players secretly setting the price for their product. The person who has charged the least gets to sell. The one who has charged next-to-least also gets to sell--as long as his price wasn't more than 1,000 DM above the person below him. In fact, as long as there isn't a 1,000 DM gap between one player's price and the next, every player gets to sell. But any player who has charged over 1,000 DM more than his next-lowest competitor--and all players who charged more than him--gets locked out of the market.

There is room for all kinds of maneuvering in the game. After the first few rounds, you make more money on the stock market than you do running your company, so you can actually drive your company into the ground--advancing someone else's company--and come out ahead.