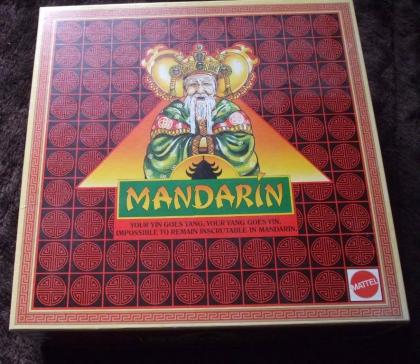 Game Contents
1 game board
Tile dispenser and lid
72 animal tiles
1 die
5 Mandarin figures
5 tile collection cards
Chinese play money
Instructions
Description of the Game Board
The game board depicts the Chinese Zodiac, a cycle of 12 years in which each year is characterized by an animal or symbol. The Chinese, in common with many other Asian people, believe that every person will demonstrate in their lives those qualities of temperament of the special animal which controls the year of their birth.
Players can discover what Animal Year they were born in by looking for their year of birth around each animal picture on the board. The Chinese Year, unlike the Western Year, runs from February to January, so remember this as you discover your animal sign. For example, a person born in January 1956 would be a goat, whereas a person born in February 1956 would be a Monkey.
Operation of the Tile Dispenser
Tiles are drawn one by one from the Dispenser by firmly pushing down on the lever on the side of the Dispenser. Occasionally, and especially when very few tiles are left in the Dispenser, no tile will be dealt on the first push of the lever. Simply push again, until a tile appears.
Game set up
Put all of the tiles in the Dispenser and place the lid on top. Gently shake the Dispenser and place it in the center of the board. Each player chooses a Mandarin and places it on the board on the center Chinese Character space of their own animal sign. If two or more players share the same sign, simply place the Mandarins side by side on the same space.
Object of the Game
Players collect tiles and place them in the appropriate places on their Collection Cards. The game ends when one player has collected at least one tile of each animal type, or all 6 tiles of one animal set. The first player to do this is the winner.