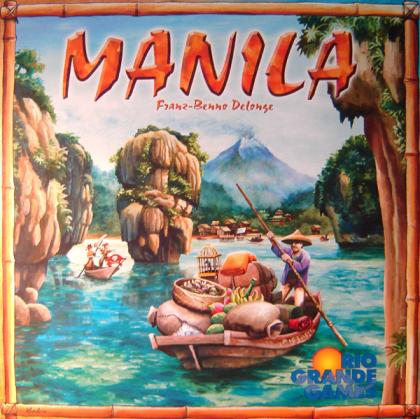 Barges, freight and profits are what it's all about in Manila, a speculative contest for 3-5 players. Goods shipments, intended for transport along sea routes, are in danger of gathering dust in the warehouses or being lost at sea in a storm. While the players speculate about success and failure, the ultimate fate of the ships will be determined by the dice.

There are four shipments that need to get to Manila - jade, ginseng, silk and nutmeg. A round begins with an initial auction to become harbour master. If you win, you'll be allowed to buy a share of one of the shipments, choose which three shipments you'd like to take down river and how likely they are to make it to their destination in the harbour. If they make it to Manila, their share price will increase. The aim of the game is to bet on the outcome of these shipments, with dice ultimately determining their fate. How many of the three boats will make it and which ones? Would you like to provide insurance against possible failed ships or perhaps you think pirates will snatch a chance to take control? Manila is a fun family game that takes minutes to learn and brings the river boats of the Philippines to life!