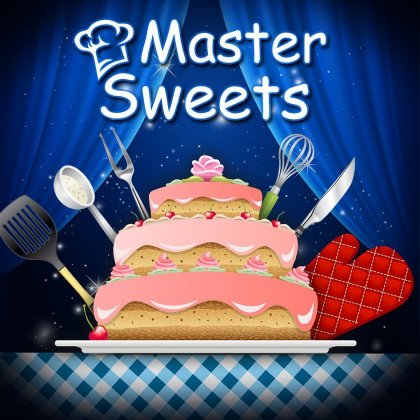 MasterSweets is an easy to learn, fast to play, family-friendly card game with great repeatability.&#10;MasterSweets has four different game variants: competitive, player elimination, cooperative and solo.&#10;&#10;In the main competitive variant of the &quot;MasterSweets&quot; you will take up the role of one of the 16 fancier confectioners(each with different special ability), competing to present the best confectionery delights. &#10;&quot;MasterSweets&quot; Gameplay&#10;Beginning with the starting player, players take turns in clockwise order. On his turn the player has to take one of the following actions:&#10;&#10;1 &ndash; Take a card from the market into his hand. &#10;2 &ndash; Take the top card of the drawing deck.&#10;3 &ndash; Alter a recipe from the cookbook by exchanging one of the ingredient cards in his hand with a card from the cookbook.&#10;4 &ndash; Play a special card from his hand. &#10;5 &ndash; Perform the special skill of his role.&#10;6 - Complete a recipe. Give all the ingredients compiling a recipe to complete it.&#10;&#10;Each recipe gives a certain number of points which equals the sum of the points of ingredient cards that compiles the recipe. At the end of the game the player who has collected the most victory points, wins.&#10;&#10;In the elimination game &ldquo;Clash of Sweets&rdquo; each player will create their own unique cookbook and will try to steal their opponents&lsquo; recipes. This way, he reveals other players&lsquo; culinary secrets and their unique cookbooks decreases. After the last recipe from a player&rsquo;s cookbook is stolen, the player must leave the game. The last surviving player with recipes that have not been revealed is the winner.&#10;&#10;In &ldquo;Clash of Sweets&rdquo; the active player allowed actions are:&#10;1 &ndash; Take a card from the market.&#10;2 &ndash; Take the top card of the drawing deck.&#10;3 &ndash; Play a special card.&#10;4 &ndash; Exchange an ingredient card from his hand with a card from another player&rsquo;s cookbook. &#10;5 &ndash; Improve a card in his cookbook. This way a recipe form the cookbook becomes more difficult for stealing. &#10;6 &ndash; Steal an opponent&rsquo;s recipe.&#10;&#10;In the cooperative variant - &ldquo;Sweets workshop&rdquo; a royalty has noticed our masters of the sweets. She wants them to make incredible sweets for her birthday. Now the players must combine their efforts and team up in order to exactly fulfill all the royal&rsquo;s requirements.&#10;In &ldquo;Sweets workshop&rdquo; each player will hold the cards in his hand facing the rest of the players. The other players will give him clues about his cards.&#10;&#10;In &ldquo;Sweets workshop&rdquo; the active player allowed actions are:&#10;1 &ndash; Point a card from the cookbook and then discard a card from his hand. If the discarded card is of the same type as the one that has been pointed at, turn the cookbook card face down.&#10;2 &ndash; Discard a card from his hand and exchange the position of 2 cards from the cookbook. &#10;3 &ndash; Discard 2 cards from his hand in order to discard a card from the cookbook. Replace the discarded cookbook card with a new card from the drawing deck.&#10;4 &ndash; Discard a card from his hand in order to give a clue to another player, what cards he holds in his hand. The active player must indicate &ndash; by pointing &ndash; which cards he is offering a clue about. Two types of clues are allowed:&#10;A) A clue about one, and only one value. For example: &ldquo;You have &lsquo;5&rsquo; point cards, here and here and &hellip;&rdquo;. &#10;B) Point a recipe in the cookbook. Afterwards, the active player should point out all cards from one team-mate hand that are of the same type as at least one card from the selected row or column. For example: &ldquo;Here and here and here &hellip; you have the same cards like in this recipe&rdquo;.&#10;&#10;At the end of the game, if all the cards in the cookbook are face down, then the queen is happy and all players win together. Otherwise the game is lost.&#10;&#10;To be a true master of the sweets, you need a lot of workouts. The best workout is when you are confronted with your own best achievements.&#10;The solo variant &ldquo;Lonely in the kitchen&rdquo; is the same like &ldquo;MasterSweets&rdquo; for two players. The goal in the &ldquo;Lonely in the kitchen&rdquo; is the player to collect more victory points than George &ldquo;The cake&rdquo; (his fictional opponent) at the end of the game.&#10;&#10;