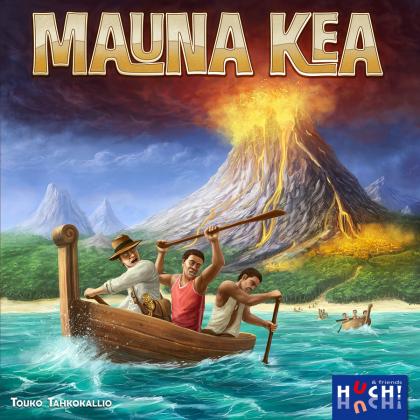 Help! Lava is coming!! In Mauna Kea, you're exploring a previously unknown volcanic island in the South Pacific with your research team when suddenly there's a terrible roar: The volcano has come to life! Now, you must find as many artifacts as possible and bring them, along with your researchers, to the rescue boats at the coast. If you plan your ways cleverly and have a little bit of luck, you'll survive the volcanic eruption as the rescuing hero!

Each player starts the game with a team of 3-5 researchers (depending on the number of players) and a set of randomly selected terrain tiles that collectively have at least five movement points; the more jungle spaces on a tile, the more movement points it provides. On a player's turn, he must play all of his tiles in any order he wants, either placing them on the game board to expand the terrain on which players can move or spending the movement points to move his researchers to orthogonally adjacent spaces (1 point to enter jungle, 2 points to enter water, 16,000 points to enter mountain — actually, you can't enter a mountain space). If his researcher enters a space with an artifact, he then drags that artifact with him as he moves. If his researcher reaches a boat, he fills as many seats as possible with artifacts, then hits the water. Sorry, chumps!

At the end of his turn, he draws new tiles — and if he pulls a lava tile from the bag, he places it on the board immediately. Lava flows away from the central cone, with each tile indicating the side of the volcano from which it flows. If lava hits established terrain, it covers that terrain; if it hits researchers and artifacts, it covers them, too. Players continue taking turns until someone has no researchers left on the island, whether due to them leaving the island or donning a lava blanket. Everyone else takes one final turn, then players score, collecting 3 points per saved researcher, 1-3 points for each artifact, and -1 point for each empty space on the boats they used. The player with the highest score wins.

In the advanced game, players don't return tiles to the bag when they use them for movement points. Instead they start the game with four action or task cards in hand. They can play as many action cards as they wish on a turn to help their researchers cross mountains, swim faster, or helicopter to safety, but they have only four for the entire game. The game now ends when a player has no researchers or no tile remain in the bag. In addition to their other points, players now score for completed task cards, earning points for specific combinations of artifacts or for taking a certain boat. Again, the player with the highest score wins.